The picture below shows Alpinia zerumbet 'variegata', also known as the variegated shell ginger, growing in a tropical location. This plant has 'I want one of those' written all over it. 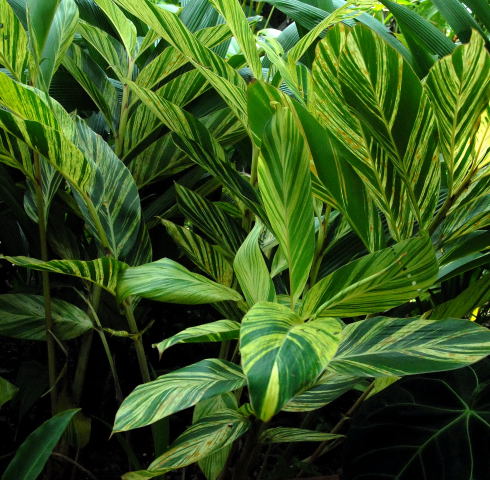 The account below outlines the attempts made to grow the same plant in Britain. The tale harks back to a time before digital cameras were commonplace, so for the first part, you will need to use your imagination.

The plants were initially purchased from a mail order company that must have used a bacon slicer to divide the rhizomes. The three small plants (leaves) arrived in late May, just in time to be included in that years display. Their rate of growth was such that within a few weeks they had been completely swamped by the surrounding foliage and nothing further was seen of them that summer.

By the end of the first summer it was decided that perhaps they would be better suited to pot culture. Literature also suggested that the plants flowered on the second years growth which added an incentive to keep them growing. The plants were dug up pre-frosts and potted up in decorative containers, destined to be grown on the shady patio the following summer. The plants were overwintered in the greenhouse.

The plants spent the next two years in leaf - winters in the greenhouse and summers on the shaded patio. At no point was any attempt at flowering witnessed. What was witnessed however was an insatiable thirst. Despite being grown in the shade, the plants demanded almost daily watering, curling up their leaves unless their demands were met.

By the end of the next winter the Alpinias' naturally arching growth meant that they were taking up an increasing amount of floor space in the greenhouse. The leaves were also taking a lot of flak from leaf-rolling caterpillars. The following spring they would be planted back into the border as they now had sufficient height to hold their ground.

Removing the Alpinia zerumbet 'variegata' plants from their pots revealed a huge root system that had almost completely displaced any soil. This went some way to explaining why they were always so thirsty. They were planted out in the border where they remained until the first frosts. The foliage was cut back, the roots mulched and left in the soil over winter. 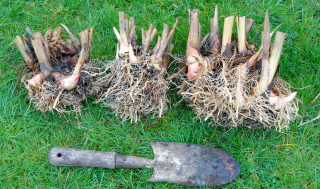 The first (rather washed out) shot of the Alpinia zerumbet 'variegata' rhizomes the following spring. (Not all that impressive for four seasons growth).

The soil had been removed using a hosepipe and the plants were subsequently potted up in fresh compost and placed on heat mats in the greenhouse. 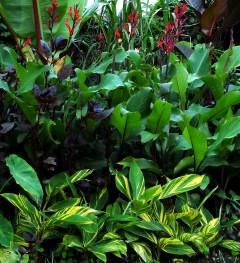 This picture shows Alpinia zerumbet 'variegata' in early August. The plants immediately behind are Canna warscewiczii.

By now it was accepted that the plants were never going to break any growth records but they did look attractive placed at the front of the border.

At the end of this season it was decided to divide the plants to create as many new plants as possible. If they could not provide any vertical impact, at least they could be used in a larger block for some horizontal interest. 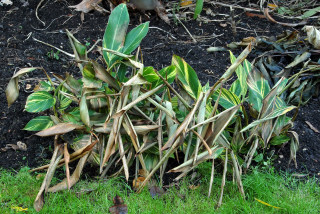 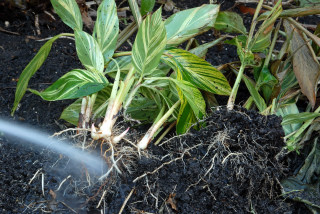 ← The first frost was allowed to knock out the foliage.

The rhizomes were washed of soil in the usual manner. → 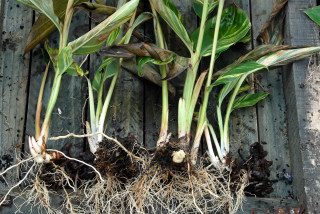 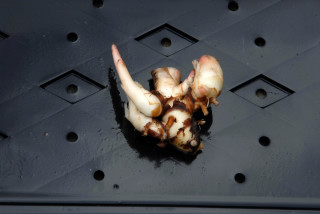 The rhizomes were divided keeping only the young fresh sections. All leaves and roots were removed. (At the time, it did feel a bit extreme). The now divided sections of Alpinia zerumbet 'variegata' were potted up and immediately placed on heat mats in order to give them the whole of the winter to get their act together. 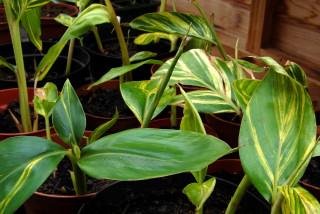 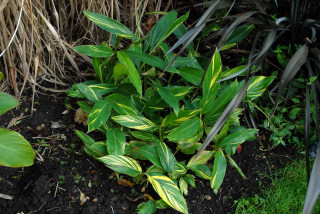 ← Growth achieved on the heat mats by 20th of March.

Growth achieved by mid November, just before the first frost was predicted. → 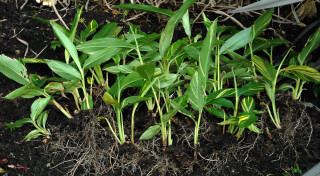 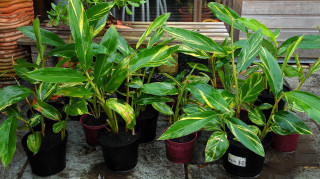 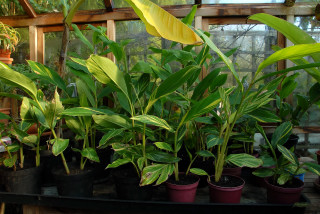 This time the plants were dug up pre-frost and kept intact.

The plants were left with as much root as possible and potted up in fresh multi-purpose compost, then transferred to an unheated bench in the (heated) greenhouse.

The plants are seen here growing in the greenhouse. Quite a lot of space had to be allocated for these plants in an environment where space is at a premium. 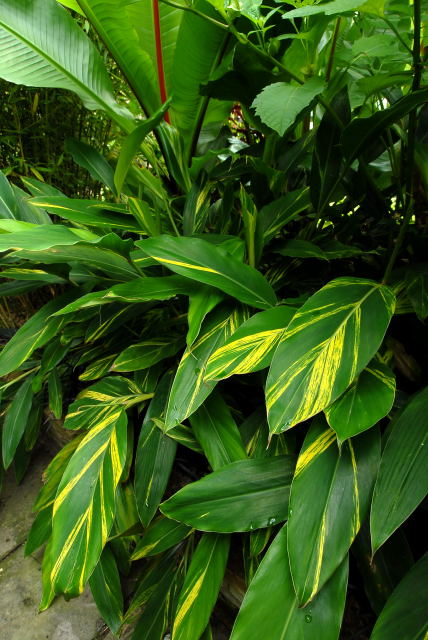 This particular year the plants were planted in a way that the would receive shade from various Ensete ventricosum for a large part of the day. As this shade was cast in one of the sunniest spots in the garden the location was much warmer than in areas shaded by the house and the Alpinia zerumbet 'variegata' plants for once looked half decent.

During establishment the plants still suffered from leaf curl when ever the sun hit them. It was not until quite late in the season, when the plants had (presumably) established a large enough root system, that they could cope with full sun without looking tortured. 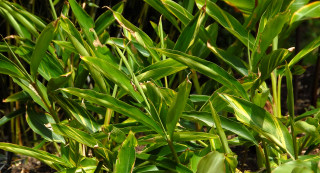 The picture above is more typical of what the plants looked like during establishment, on a sunny day.

This lead to the idea to see if the plants could be overwintered in situ and in leaf. A string of mild winters suggested that with suitable protection this might be possible. 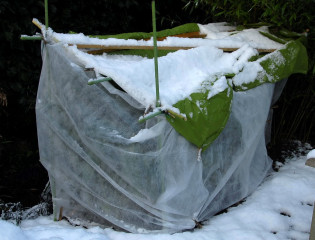 The result of this thinking lead to a crude construction to keep the worst of the frost of the plants.

The next thing to happen was the coldest winter since nineteen oatcake. Minimums of -8ºC (17.6 ºF) and sub-zero day time temperatures for weeks at a time.  This killed the plants out right.

Had the more traditional procedure of removing the foliage and mulching the roots heavily been followed, the plants might still be with us today.

In the end, it was just a relief that it was all over.

Unfortunately Alpinia zerumbet 'variegata' is not really cut out for life in a mild temperate environment. The effort involved just to keep the plants ticking over is better spent indulging more willing plants.

If you do crave this plant, keep one as a pet and leave the main displays for your more vigorous plants.

What this plant really wants is warm/hot shade in a humid environment with a moist soil.