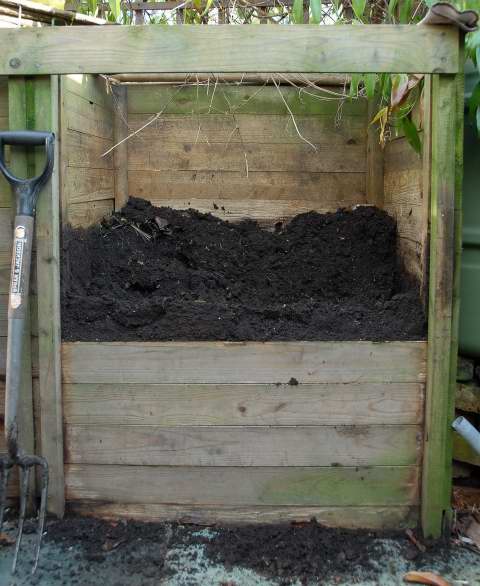 Imagine for a moment, (this applies more to men and single women), a kitchen bin that only needs emptying once a year. (Close your eyes if it helps.)

Making compost is pretty straight forward.  Anything that once grew in the ground can be used.  Cool climate tropical gardening presents you with two periods with high volumes to compost.  One in late winter during the cut back and tidy up phase.  The other just prior to and just after the first frosts.  The periods in between consist mainly of dribs and drabs of kitchen scraps, lawn mowing's and small scale garden waste.

The production of garden compost is generally achieved through one of two processes.

Hot composting is the process when large amounts of material are available in one go.  This method is used by botanic gardens and municipal councils that have large volumes of waste. Hot composting will quickly (in a few weeks) produce compost.  The advantages of hot composting are as follows:

However in order to produce compost by this method you need a lot of stuff to begin with.  It requires regular turning, preferably by some sort of machine like a JCB skid steer loader.  Plus you need lots of space!  None of these conditions are commonly met in the domestic garden scenario.

Compost tumblers can be used in the domestic setting to produce compost quickly.  They are large pieces of equipment suitable only for people with a lot of spare space in their gardens.  They are basically a large cylindrical drum mounted on a couple of legs.  The drum has a handle.  When cranked regularly, the rotting material is kept well aerated and speeds up the process.  In the domestic setting though, what's the rush?

As hot composting is not that relevant to your typical garden we shall move swiftly to something that is.

This method of producing garden compost is the most common.  Cool composting is the regular addition of compostable material to some form of compost bin.  There will be occasions when a large volume of material is collected and some heat is generated but largely the cool compost heap decays slowly with the help of various bacteria and creatures, in particular, worms.  There is no need to purchase any worms or activators, it all just happens on its own.

My own illustrated compost making regime is described in full here.

In order to make good compost there is a small list of requirements.

The best compost bin set up is to have a system with two bins.  One for adding to and one for maturing.  Whatever the size of your garden you should try to have two bins.  If your garden is small, have two small bins.  Having two bins means never having to separate mature compost from semi-rotten yuk.  Growing tropical plants creates a lot of matter.  The larger your compost bins the easier it is for you.

If you are serious about making compost a garden shredder is a valuable tool.  For the typical urban garden an electric powered shredder will be sufficient.  If you have a sprawling estate, more powerful petrol versions are available.  The benefit of using a garden shredder is to increase the surface area of what you wish to decompose.  The more surface area the faster the process.  If you put a thick branch straight into the compost bin it will still be there in a years time.  Shred it and it becomes incorporated with everything else.

There are basically two types of electric garden shredders.

In an ideal world it would be nice to have one of each.

If for whatever reasons you decide against a shredder, twigs and the like should still be chopped into small pieces using secateurs.  Apart from increasing the surface area for decomposition, a lack of twigs will make your job of turning the compost that much easier.

Leaf mould is the process of composting leaves separately.