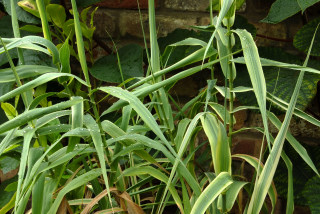 Arundo donax variegata, also known as 'versicolor' is as the name would suggest a variegated version of the giant reed. It is smaller in stature, slower growing, less hardy and significantly less invasive than its green cousin.

Having lost this plant a number of times to frost when grown in the ground, it was decided to have a further attempt at growing this plant in a container.

For the first season, the plant grew well in its container. In subsequent years the performance tailed off. The pot became root bound leaving less and less room for watering/feeding. So although the plant was surviving the winters, its appearance made you wish it hadn't.

With nothing left to loose an attempt was made to propagate the Arundo donax variegata by means of stem cuttings. 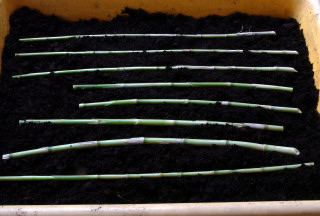 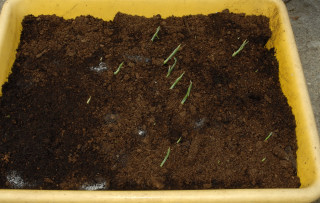 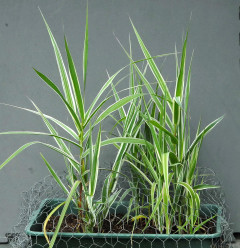 A similar procedure was carried out the following February.


All in all this attempt was much more successful. The experiment would have been more so had the tray not been neglected during a warm period during the early stages. 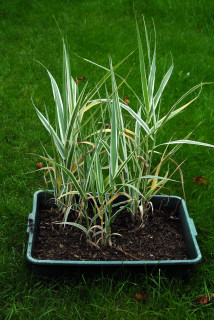 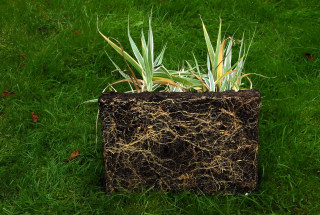 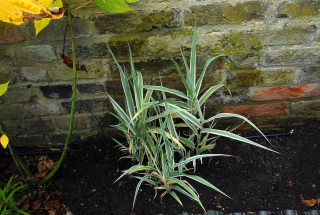 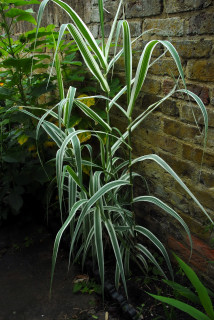 The cuttings were planted out in their entirety in October.

One year later the plants looked like this. (All new growth). →

The period in between these two shots, the stems of the original cuttings were removed and laid directly in the soil of the same flower bed. These stems however failed to sprout. (This could have been that they were just too thin with insufficient reserves).

One vaguely interesting point is that the variegation was a clean white when the plant was grown in the soil and much creamier in colour when grown in the container.

A further experiment awaits the stems of this plant and any future successes will be posted here.

An experiment was carried out to see if the same result could be achieved with the regular Arundo donax: 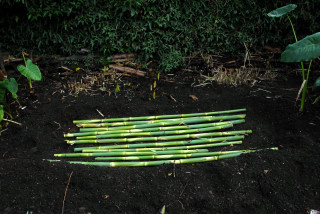 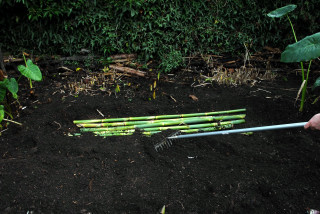 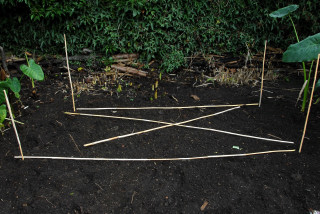 By mid May the canes were sprouting, although at this stage no sign of root formation was evident. No doubt roots would have appeared in due course.

However the space was needed by this stage so the canes were removed, shredded and added to the compost heap.

The same experiment was conducted simultaneously with stems of Miscantus floridulus but failed to produce any growth whatsoever.