Coping with pseudostem loss on your banana plant

A combination of apathy, curiosity and a string of mild winters led to the decision to leave the banana plant pseudostems un-protected for once. A thick layer of mulch was laid around the base of the plant, farewells were said and the kitchen door was closed on the garden for the winter. What followed next was the coldest winter for a considerable time. After a brief but noble battle with the elements, the stems collapsed in a defeated slump. 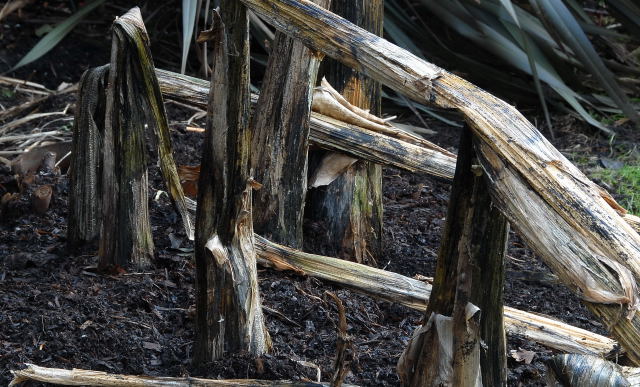 Fortunately spring follows winter and it was not too long to wait and see if the rest of the banana plant had survived.  The mushed pseudostems were cut down to a level where the knife met some resistance.

This particular year, Spring was nice and warm and it was not before long the first signs of life were seen. In some instances the pseudostems re-grew from within existing stumps, others surfaced close by. 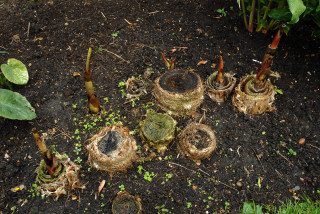 On May 23rd the banana was begining grow with confidence. By May 30th... 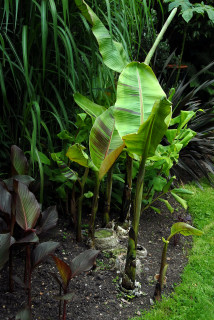 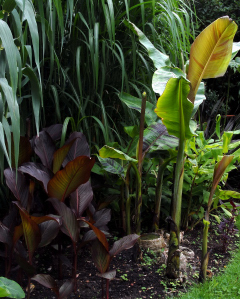 3 weeks later on the 22nd of June and then plus one week on the 28th June. 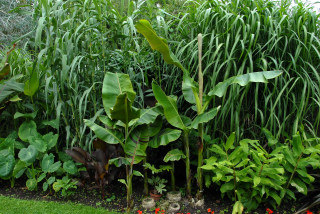 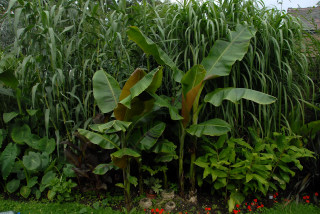 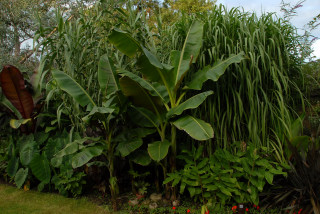 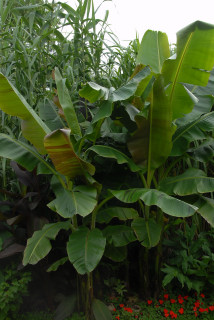 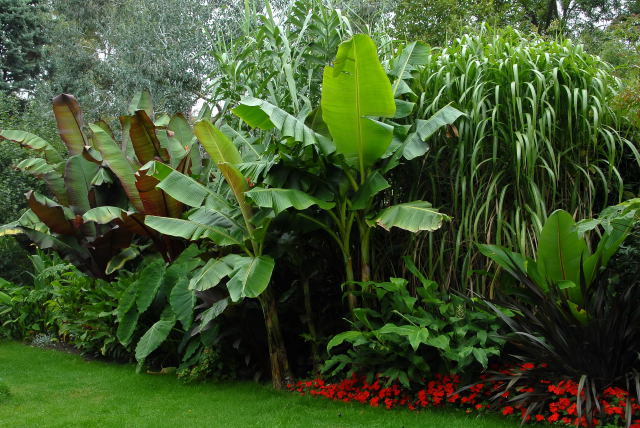 From this picture taken on the 28th of September it can be seen that the banana plant (Musa sikkimensis) is quite capable of producing significant growth from ground level in just one season. This must question the need to wrap the pseudostems at all?  By not wrapping your banana plant you also reduce/remove the 'refugee camp' look of your garden in winter.  Although final height will never achieve that of a wrapped banana plant, the top of the larger pseudostem (excluding leaves) is over 5 feet (1.5m) tall.

The pseudostems also had a much nicer appearance than those of pseudostems that had been wrapped in the past.  The new stems (pseudo) had a much cleaner,greener, fresher look to them, lacking the usual raffia style debris that would normally cloak them. 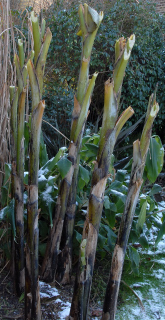 The next winter was to be the coldest for 25 years and once again the pseudostems were beaten by the cold.

Once the leaves were removed it was clear just how much growth had been achieved the previous summer.

The pseudostems would soon loose their upright stance..

Spring that year was not as amenable as it had been the year before. It was not until the third week in May that the first sign of life was (barely) visible. (Hence no photo).

They say 'Curiosity killed the cat' well soon it would nearly kill a banana plant too.  It was decided to investigate just how much of the bananas corms were still viable.  The banana was in any case progressing more and more towards the lawn leaving a significant area of under-performing border in its wake.  It seemed like the perfect excuse to dig it up. 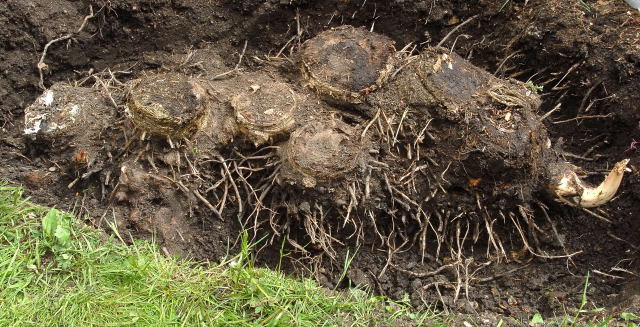 The picture above shows the exposed banana corms.  The very first shoot to emerge from the soil was on the left hand side (not that clear) just below the whitish stump (if you strain your eyes).  The quite large shoot on the right hand side was not discovered until after the excavation was underway. 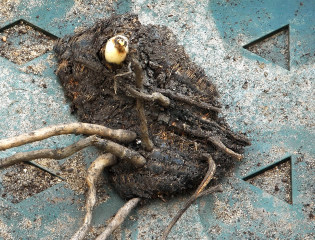 Quite a number of smaller shoots were discovered once the spade had sliced them off. It is during these moments you wonder if all this was really such a good idea after all.

It is probably safe to conclude that Musa sikkimensis is root hardy in zone 9. Zone 9 minimum temperatures of -6.8°C were achieved. There were also several weeks of sub-zero night time temperatures with daytime temperatures struggling to reach zero. This resulted in the ground freezing quite significantly.

The two largest shoots were removed from each end of the corm and potted up individually. The rest of the corms now needed to be removed. Fortunately this was much less arduous than had been expected. 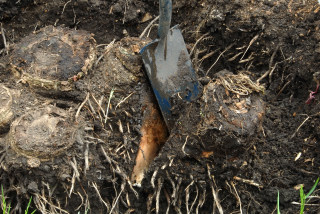 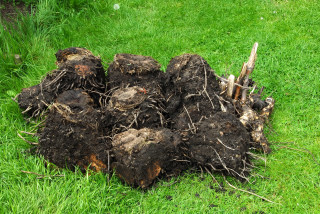 A spade was forced down between two old pseudostems and using a little sideways force, were split apart easily. This was done until all the corms were removed. No further experimentation was done and the corms were chopped up and added to the compost heap. 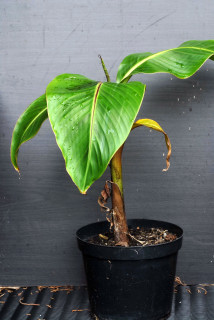 As for the potted up shoots....

The largest one never really got off the ground although it was given no help in the form of bottom heat or greenhouse time.

The smaller, original shoot also did not show a great deal of dynamism but with equal lack of care was able to achieve this much growth by summers end and lives on to fight another year.