Apart from the varieties mentioned in canna varieties, there are a few more varieties to choose from. Possibly as a result of the on-going virus problems with hybrids, more and more 'species' are finding their way into seed catalogues. 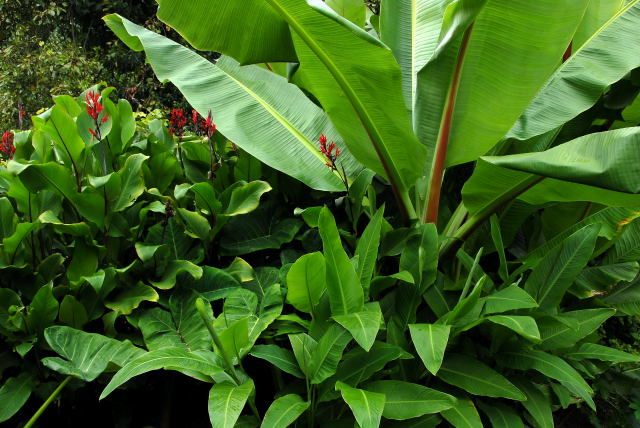 The picture above shows C.warscewiczii to the rear (with the red flowers) and C.paniculata (with the pointed leaves) in the foreground. 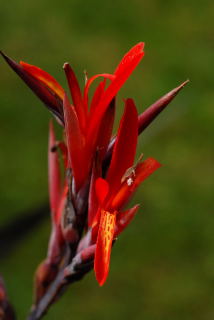 Not terribly exciting really. A fairly standard green canna with small red flowers, small even by species standards.  If you lean in close enough to risk a bee sting you will be able to see a slight speckling of the flowers.  C.coccinea is not that happy being overwintered in the ground.  It is best lifted after the frosts have blackened the foliage.  Clean up the rhizome, re-pot in fresh compost and keep cool but frost free until spring.


This plant gets the - Mmmmeeep -  'Thanks for playing' buzzer. 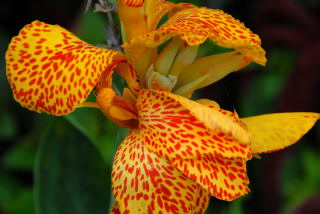 This is one of the few hybrids whose seeds will give you something that closely resembles the parent plant.  The flowers (on different seed raised plants) appear uniform from a distance but on closer inspection will show a slight variation between plants - (rather like zebras).

This gives you the opportunity, should you so desire, to select your favourite flower pattern. This particular plant can then be reproduced through means of rhizome division.  This will result in plants with identical flowers. It is however, much easier to live with the slight discrepancies and grow it new from seed each year. 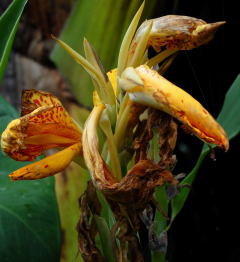 C.en avant is a sturdy, strong growing plant with light green leaves.  You should expect a height of 3-5 ft (90-150cms). Grow it in maximum sun as it is for the flowers rather than foliage that you are growing this plant. This plant is more striking when planted in a large group rather than on its own.

It produces and abundance of seeds so is easily reproduced year on year for nothing.

Perhaps the only negative for this plant (as is typical for hybrids) is the messy appearance of the flowers after a rain shower. 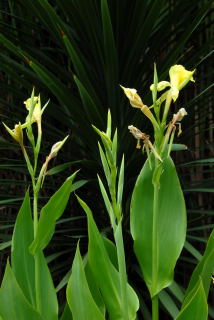 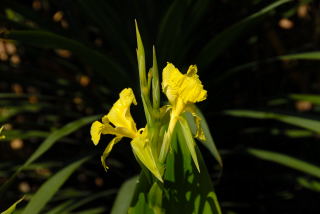 Canna flaccida is an attractive plant with nice pointed upright leaves.  The flowers are quite large for a species and verge on being frilly.  C.flaccida is not the fastest growing of cannas and is quite slow to bulk up.  It is also quite mean in the seed department so if you like this plant, it is advisable to dig up, re-pot and store frost free rather than leave it in the ground over winter.  It is one of least stable canna and should be positioned away from traffic. 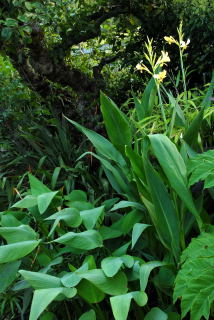 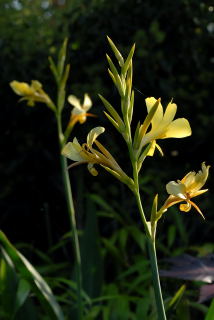 This is another nice one, very elegant.  The flowers are a bit different from other species.  The leaves are particularly attractive, glaucous as the name suggests and nice and pointed.  In the picture to the right it is growing in a swamp bed along with Thalia geniculata to the front.  If you do decide to grow it in a swamp/bog it will need to be lifted as soon as it is frosted.  Left out in a swamp bed over winter will be a guaranteed way to kill it (unless of course you live in a frost free area). 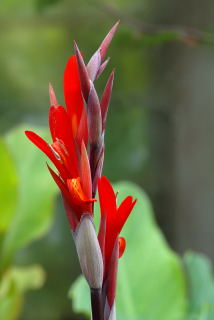 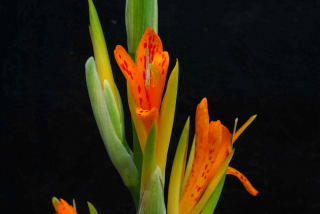 This was the original seed grown canna with all the qualities one would expect from such a forerunner. They are attractive, sturdy, fast growing, produce lots of seed and will re-grow if left in the ground over winter in milder climates (if well mulched etc etc).  They come in either red or yellow with a slight speckle, the yellow version is particularly nice. 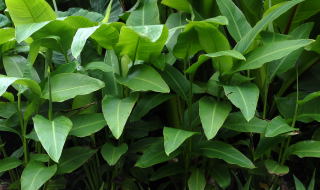 An attractive foliage plant that clearly has never read anything about the British climate, any aspirations it may have about reaching its quoted 8-10 ft (2-3m) final height go straight out of the window.  This is a slow plant, even when pampered in the greenhouse.  The picture at the top of the page shows canna paniculata growing in same bed as C.warscewiczii.  Both varieties were seed grown that season and started at the same time, the C.warscewiczii at least double the height of C.paniculata.  (Seed purchased from more than one supply has produced the same results).

Having said that, it's not all bad news.  The plant has particularly attractive foliage and its slow growth rate allows you to plant it at the front of  the border with out fear of  it growing out of proportion.

It is the least drought tolerant of any cannas mentioned on this site.  Its leaves are quite thin and suffer, the edges turning brown, if left to dry out.  Most other canna leaves simply curl during times of stress and resume their normal position when damper conditions return. 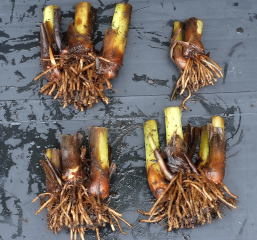 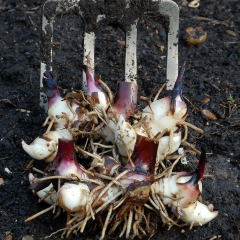 The pictures above show the contrasting sizes of four C.paniculata rhizomes on the right with a single rhizome of  a more vigorous variety on the left.  The largest of  the paniculata rhizomes would fit into the palm of your hand the other is the size of a garden fork.

The best way to overwinter this variety is to dig it up post frost, clean and re-pot the rhizomes, then place the pots straight onto a heat mat.  It takes them quite a long time to get going even with this treatment.  Simply re-potting and keeping them in the greenhouse is no guarantee of survival and if left in the ground you can forget it.

Digging them up in leaf, whilst it may seem like a good idea at the time, will soon result in a sickly looking plant.  As autumn turns to winter and light levels drop off, so does this plants enthusiasm.  Aphids soon become a problem with this method. The main objection to storing plants in leaf is that they simply require too much space.