The castor oil plant - Ricinus communis is a very useful tropical foliage plant.  It is grown from seed annually, easily reaching 10 foot plus (3m)  in one season, (depending on the variety.) 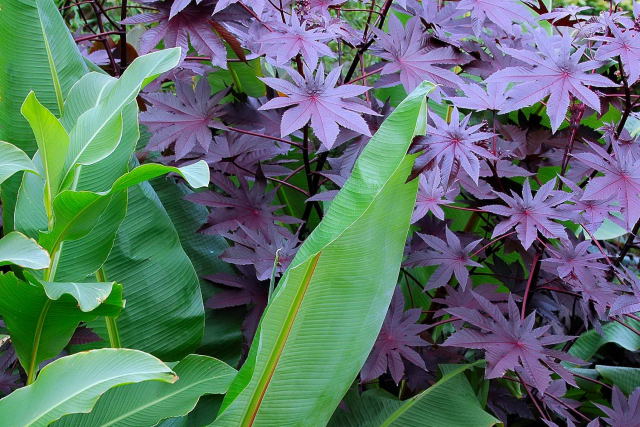 The one negative of the castor oil plant is the toxicity of the seeds.  The seeds are said to be fatal if eaten and as such it is recommended that this plant is grown out of reach of children.  If you are a nervous parent then perhaps this plant should be avoided altogether.  However....  The seeds are generally held quite high on the plant, certainly out of reach of any very small children.  The plants are also strong and unlikely to fall over in windy conditions were the seeds could be presented.   Actually removing the seeds from their pods is also quite difficult.  Once they are ripe though, the seeds pods explode sending the seeds every where.  Again we have an 'however', the seeds do not reach this stage during the summer growing season (of a British summer).

When stored in the greenhouse over winter, the seed pods of the castor oil plant begin to explode early in the new year.  At first you may be under the impression that those pesky boys from next door are throwing gravel over the garden wall, trying to annoy you.  Then you remember there are no charming pranksters next door as a Ricinus communis seed lands squarely between the eyes.  It is at this stage, when the greenhouse floor is awash with seeds, that they are there most dangerous to foraging children.  Again if you have children that naturally put anything they come across into their mouths, you probably should avoid this plant.  Educate your children about this plant.  The decision whether or not to grow the castor oil plant is ultimately yours.

There are a number of different varieties of Ricinus communis to choose from.

Ricinus communis var. gibsonii is a smallish (relatively) castor oil plant and can be used towards the front of the border with out too much fear  of imbalance.

Ricinus communis 'Carmacita' and 'Carmacita pink' are of a similar stature as above but have red and pink seed pods.  The Carmacita pink variety gives the plant a slightly sickly appearance.

Much more fun though when it comes to castor oil plants are the big boys.

Ricinus communis 'Zanzi palm' has big leaves, grows very tall and produces tons of seeds.  When the frosts are late coming this plant can become quite large with a thick trunk. 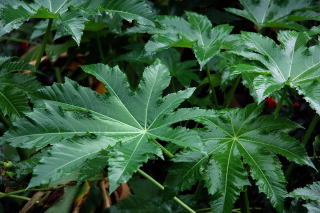 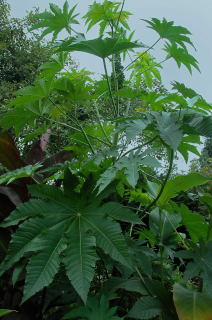 Another tall castor oil plant is Ricinus communis 'New Zealand purple', in the pictureat the top of the page.   The leaves are slightly smaller and a lovely deep reddish purple.  This is a great plant to add purple height to the garden.

There are still further varieties to chose from.

All castor oil plant foliage contrasts well with the more typical tropical foliage of bananas and the like.

Propagation of castor oil plants is by seed.  These are widely available from seed catalogues.  After one season you should be self sufficient in seeds as the seeds come true. 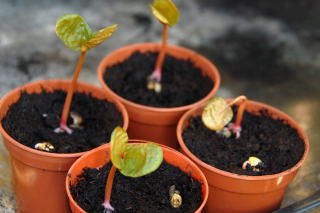 Seeds should be planted in 3inch pots filled with multi-purpose compost.  Push the seeds length wise into the compost.  Do not plant them too deep as this seems to delay germination.  Water the pots and allow them to drain.  Generally the seeds of Ricinus communis germinate quite soon simply left in the greenhouse or indoors on a window sill.  Placing the pots in a heated propagator is not necessary.

The young plants grow quite quickly.  They need potting on as soon as their roots start growing out of the bottom of the pots.  If more than one plant is growing per pot, divide them at this stage.  Make sure the compost is nice and wet and the plants will pull apart easily.

When planting castor oil plants in the garden they will need a rich soil and regular watering to establish them.

Ricinus communis 'Zanzi palm' is a big enough plant to be planted singularly.  It will often branch as it gets taller.

Ricinus communis 'New Zealand purple' is less inclined to branch and benefits from being planted in groups of three. Planted on its own it can be a little spindlely.

Both plants are better suited to the back of the border due to their height and to prevent easy access by children.  Make sure the young plants have plenty of access to light to ensure they can grow up at the rear of the border.  Leave a gap of about a foot (20-30cms) between them and any other plant. 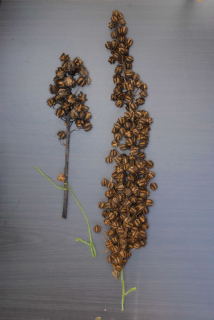 By the end of the summer your castor oil plants should have produced a number of flower spikes.  These should be covered in seed pods.  One or two of these can be removed for next years plants.  Hang them up by the stem to dry .  Avoid laying the seed pods down as this can attract mould.  These will then dry out over the winter as mentioned above. 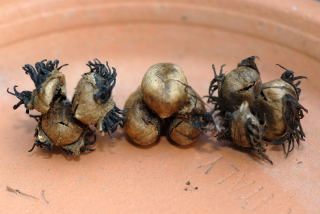 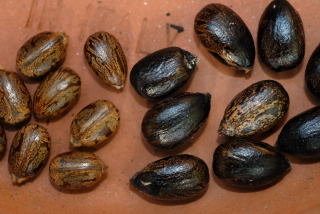 Each one of these pods contains a seed.  The pods need to be split apart to remove the seeds.  Each flower spike from Ricinus communis 'Zanzi palm' contain hundreds of seeds, less on the Ricinus communis 'New Zealand purple' but still plenty.  These are large plants that take up a lot of room so you do not need that many.

Because Ricinus communis produces so many seeds, you will only need harvest a small proportion.  Leave the remainder of the seed spikes on the plant and add to the compost heap once the frost has destroyed the plant.  When you then turn out that particular batch of compost on to the soil you will be presented with loads of self seeded castor oil plants.  These can prove quite useful.  Either you can transplant them to other parts of the garden or leave them where they are.  Don't leave too many, the occasional one can come in handy  for filling that awkward gap.  If you find you have too many just pull them out.  One thing you can do with self seeded castor oil plants is to remove the growing tips and create a lower growing bushy plant.  This will need constant nipping to keep it the size you want.  They are useful towards the end of the season when some other plants such as Dahlias have had enough.  They push past and add a nice fresh bit of growth. 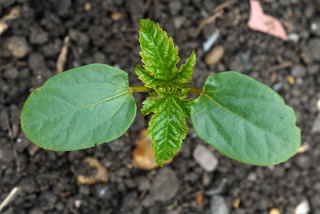 This picture shows a self seeded castor oil plant.  An advantage of growing any plant from seed is that it teaches you to recognise a desirable plant from one that isn't at the early stages.  The compost heap, once emptied can be quite a treasure trove of seedlings, keep what you want hoe out the rest.