How I make compost 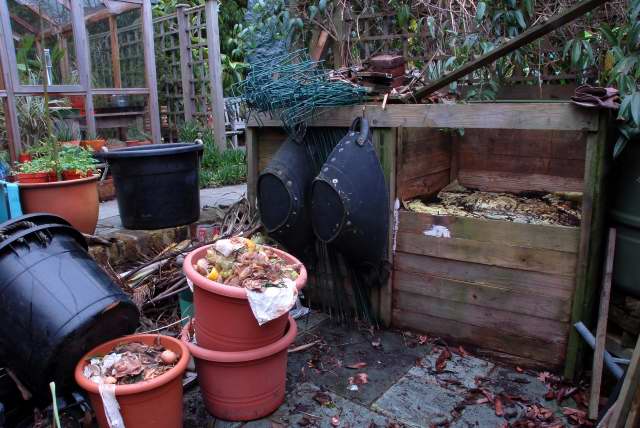 Compost bins ready to be turned over and out

At about this time of year (20th January - 14:50hrs..), it is time to begin to make compost again.  The fill side of the bins will take no more.  Buckets of semi rotten kitchen waste await composting.  Trees, shrubs and grasses need to be pruned, cut back or generally tidied. 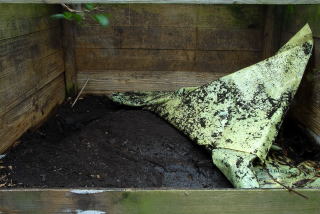 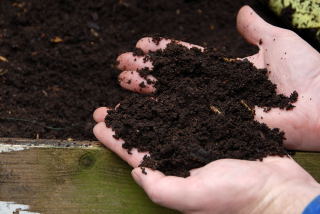 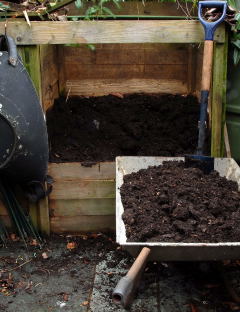 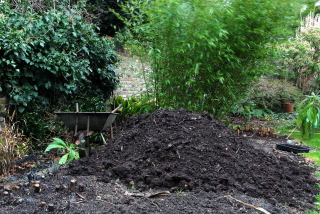 Into the barrow and off to the border.

The mature compost is loaded up into a wheel barrow and transported to an empty border in the garden.  The compost is then on hand and ready to be used once plantings begin in the spring.

This is the only part of the process when you make compost which is mildly unpleasant.  At this stage the filling side of the bins will be a mix of semi-rotten tropical foliage, kitchen waste and worms. 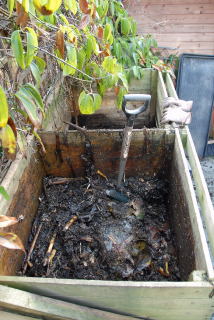 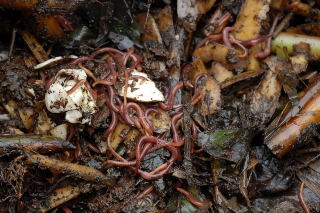 The composting process at work

Once the heap has been fully turned over, the plastic sheeting is replaced.  The whole thing is then ignored until the same time next year. 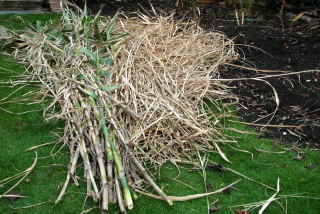 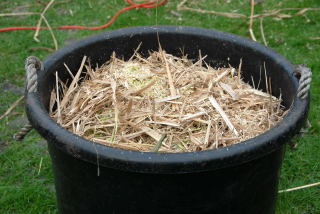 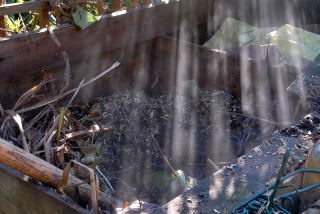 Once all the cutting back and pruning is over, the compost heap is inspected every now and then to check things are not too dry.  These early additions used to make compost are generally quite dry.  If there has been little rain, then the whole thing is soaked with water using a hose pipe.  The amount of material produced initially, almost fills the compost bin as you can vaguely see in the picture above.  This is the stuff that will eventually make the relatively weed free compost discussed at the start of this page.

The next few months in the garden are mainly concerned with creating the tropical displays.  Additions to the compost heap are mainly in the form of grass clippings (mixed with shredded paper documents) and kitchen waste.

The end of summer/early autumn provides the next high volume wave of material with which to make compost .  The leaves from Abyssinian bananas removed from plants dug up for winter storage are first in.  These are soon followed by the leaves of cold hardy bananas that have been removed prior to wrapping.

The first frost then finishes everything else off leaving quite a mess behind. 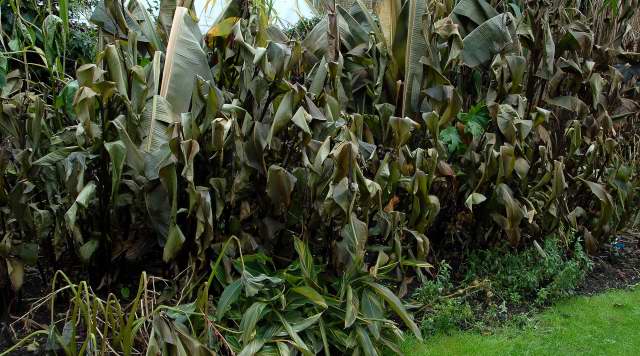 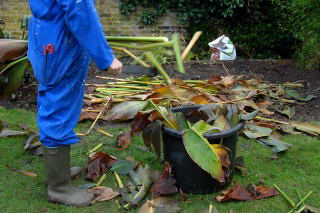 Canna stems are reduced in size 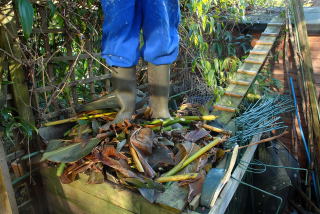 Squashing all the material into the compost bin

The amount of compostable material produced by the first frosts fills the compost bins to capacity.  This stuff is generally quite wet and takes a while to subside, particularly if it has been piled high and trampled down.  This particular addition of plant material will spend the shortest time of all in the compost pile.  This is then left until we get to the situation described at the top of the page again.

This concludes the bi-annual cycle of how I make compost.