Melianthus major is an attractive foliage plant suitable for areas with permanent planting. The plant also moonlights under the name of Honey Bush. 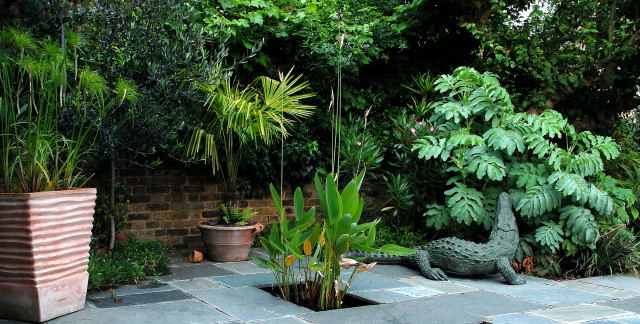 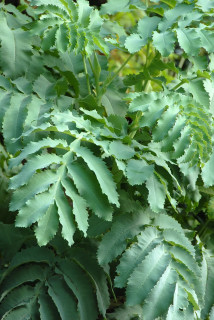 In the British climate it likes as much sun as possible in a well draining soil. Once established it requires no supplemental watering. The Honey bush has two distinct growing periods - spring and particulary autumn. During the summer months it tends to put its feet up for a bit then as things cool off it gets back to the business of growing.

During mild winters the plant remains evergreen, tolerating the occasional slap in the face down to about -4°c (25f). In harsher climates with frequent frosts where temperatures fall regularly below -4°c treat the plant as a perennial. If well mulched the plant will regenerate from the roots even after quite severe frosts.

It could be argued (and often is) that regardless of winter conditions, the plant has a much nicer, bushier appearance if it is cut back to the ground every winter. This process however removes any hope of flowers as they appear (subject to a mild winter) in early March on last years growth.

As well as missing out on flowers, another argument for not cutting back the stems (s.t.a.m.w) is that by year two, you will have quite long bare stems topped with foliage. This lends a quite primaeval look to the plant which in turn blends nicely with the desired tropical look of your garden. 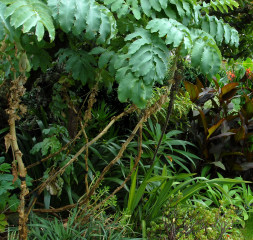 A counter argument to this though, is that these long stems can become top-heavy, liable to collapsing in a heap with just the tips heading skywards. A solution is to support the stems by tying them individually to a higher point (staking looks a mess as there would be no foliage to hide the stakes) but this is a lot of fiddly work for something that has a pretty good chance of being cut to the ground by frost the next winter.

(Perhaps this plant would make a good mascot for a debating team). 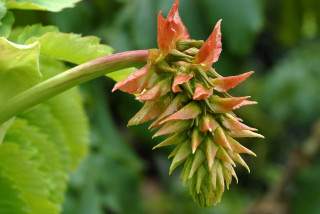 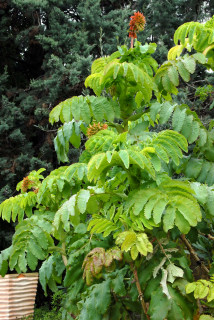 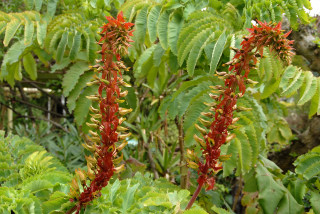 Should your winter be suitably mild then your plant may begin flowering around the first week in March.

At first, the emerging flowers are not overly impressive but enough to provoke a murmur of approval, especially if it is the first time you have noticed them.

← If the mild weather continues, so will the elongation of the flower stalks. 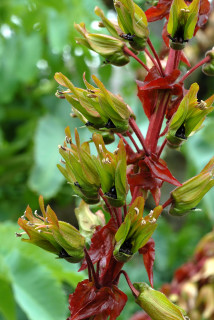 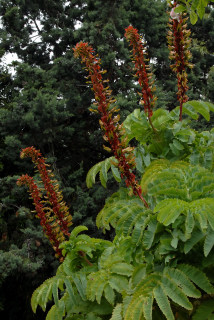 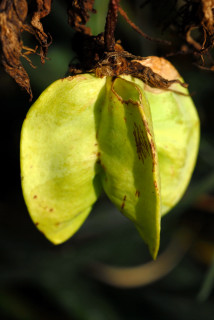 A bizarre thing is the complete indifference shown towards these flowers by the indigenous insect population (Southern England). Throughout the three month plus flowering period almost nothing has ever been seen fluttering or buzzing near to the flowers.

Having said that, Melianthus major seems to light the fire of at least one creature. Each year that this particular plant has flowered, one seed pod has been produced containing one seed.

Perhaps more seeds could be created by donning a mac and approaching the flowers with a small paint brush?

(It has been pointed out that this plant is pollinated by Sunbirds in its native South Africa. Apparently birds in Northern climes will also visit this plant if only they knew what it was. By placing bird feeders in close proxity to Melianthus major, birds visiting the feeders will notice the flowers. The Coal Tit - 'Periparus ater', specifically but not exclusively, has been seen feeding on the nectar from the flowers. This has resulted in an abundance of seeds and self sown seedlings.) 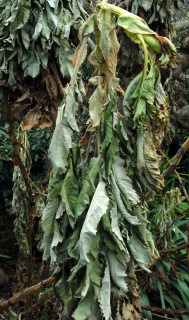 If your winter is not suitably mild, frosts will take out the foliage of your plants. Once this happens it is unlikely that any of the stems will re-sprout and the whole lot should be chopped back to ground level.

Mulch the roots well to protect from further frost and to feed the soil.

Depending on the type of spring you are experiencing, growth should typically recommence March/April time. 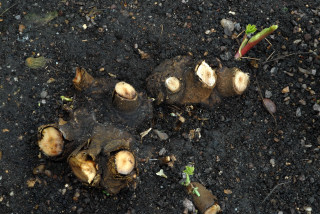 ← Here we see new growth emerging from the root stock. 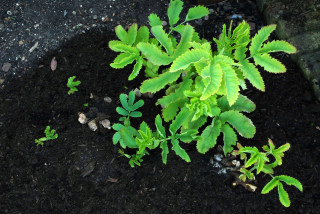 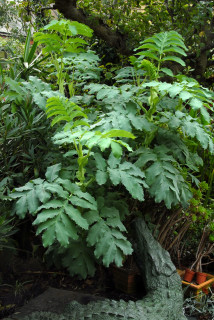 By october the plant has fully regained its stature. → 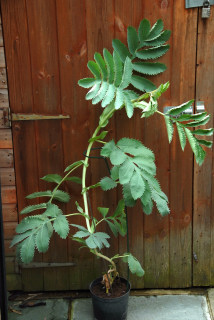 Melianthus major can be easily propagated from seed. Melianthus seeds are inexpensive and widely available.

Seeds germinate without much fuss and good germination rates can be expected from a single packet of seeds.

Press seeds into damp, sterile, multi-purpose compost and seal in plastic freezer bag and keep in a warm place. General guide lines can be found here.

The picture to the left shows a seed grown plant on the 7th August from a spring sowing.

Propagation of the honey bush is also said to be easy from basal cuttings although this method has not been tried personally.

As mentioned earlier, Melianthus major is also known as the Honey bush due to its alleged aroma. However it should be due to the fact that the plant (in this garden at least) attracts a particularly repulsive form of pulsating aphid to the underside of the older leaves. These aphids shower all and sundry beneath with sticky excrement refered to in pc terms as honey dew. Even hover flies seem to retch at the sight of these aphids so the best way of dealing with them is to remove the affected leaves and bin them.