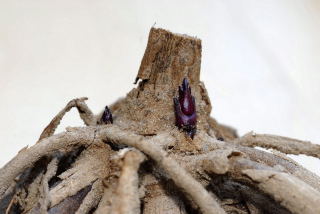 First of all you need a dahlia tuber.

A good time to begin this task is mid February. This way the new shoots will be emerging as natural light levels increase.

Keep the tuber somewhere warm to stimulate the buds to grow. 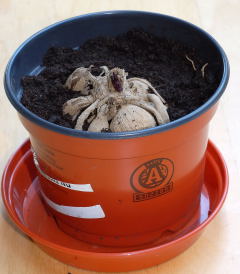 Half fill a clean flower pot with fresh multi-purpose compost.

Place the tuber onto the compost and half cover it.

Make sure none of the buds are covered.

Do not water at this stage.

Keep the pot warm to encourage growth.  A bright window sill should do (not direct sunlight).

Once growth commences you can begin to water the pot. 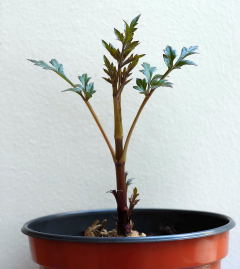 15 days later, the first dahlia shoot is ready for cutting 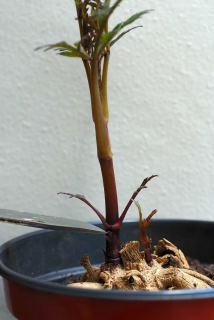 Remove the stem just below the second node up the stem.

Use a very sharp knife so it slides through the stem cleanly. 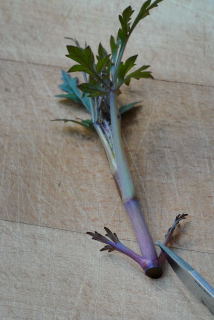 Place the cutting on a board and trim off the lower leaves. 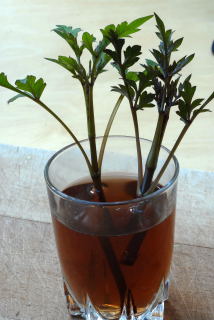 If you are propagating dahlias in any quantity, the trimmed stems can be held temporarily in a glass of water.  In this instance the stems are being held in a dilute seaweed solution. 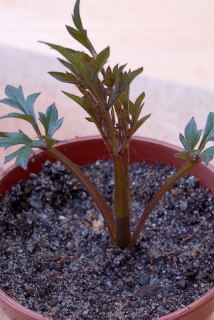 The cuttings are then planted individually in 3 inch, clean, plastic flower pots.

The pots containing the dahlia cuttings are then placed in a heated propagator. (Gentle heat)

Check periodically to make sure nothing is drying out. 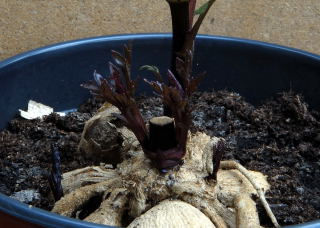 New shoots now begin to form where the original cut was made.

Other shoots are also stimulated as a result of this action. 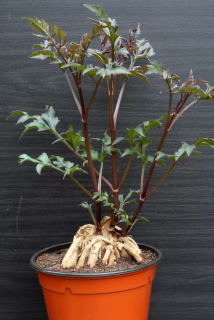 One month on, the tuber has produced plenty more material to make further cuttings, should you so desire. 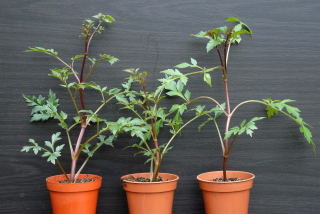 At 7 weeks the original dahlia cuttings are showing signs of steady growth. 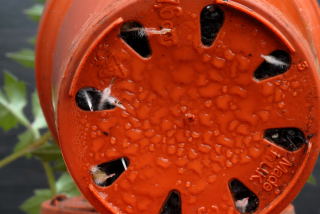 The presence of roots at the base confirms that the cuttings have taken.

The plants can now be removed from the propagator and grown on the greenhouse bench.

Four months after placing the original tuber in the flower pot, the first flower was produced on a cutting.

Your cuttings can be planted out into a rich soil in a sunny spot as soon as there is a nicly developed root system.  Make sure all danger of frost has passed.

Propagating dahlias can also be achieved fairly easily by dividing the tubers themselves.  Tuber division.